Self-Mastery Dance: The One-Two Dance of Self-Acceptance and Forgiveness 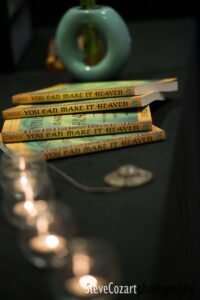 Harsh damning words of blame brought stinging tears to my eyes. The blood rushed out of my stomach and my knees felt weak. I was paralyzed by the intensity of the condemnation. Oddly, the verbal attack was not being spoken by someone else – this voice of self-blame and shame was inside.

Is this scenario familiar to you? Are you aware of the voice of shame and/or blame inside that can quickly reduce your insides to mush and your self-confidence to dust?  I discovered this voice inside myself years ago when I was ending my ‘happily-ever-after’ marriage and breaking up the family – a big no-no in my ancestral lineage.

My saving grace was beginning an intensive healing program that focused on self-acceptance and forgiveness to release past hurt, blame, pain and guilt. I was desperately unhappy, confused and seeking peace from my inner ‘hell’. When the course facilitators suggested that I was my one-and-only judge, jury, and punisher and the cause of much of my unhappiness I came face to face with a part of myself that had been running amuck in my consciousness.  Can I really forgive myself? I wondered. And Will that really release me from this pain?

So I began the process.

Step One in this TWO STEP Dance, I discovered, was Self-acceptance.  Opposite of self-condemnation, acceptance is the first step inviting an inner voice of compassion to replace  negativity.  This was a new concept. For years I didn’t know how to own parts of me that got angry, for instance. Hearing a nasty comment fly from my lips, I’d ask myself, How could I have said that? What an awful person I must be. I discovered that acceptance was not agreement with an unwanted feeling, or a decision to act on it. Nor did it assign personal meaning to this feeling by declaring, You’re an abomination for being mad. Acceptance simply acknowledges the feeling is present. Like a bird in a tree, it just is – a truth the heart can warm up to.

Step two in increasing my compassion and loving-kindness was choosing forgiveness. As I practiced opening my heart, accepting my feelings and forgiving the judgments all the hurt I had carried inside began to be replaced with loving pardon. The release of self-imposed judgments became a deeply loving act. Vibrant connectedness to a place of inner strength quickly replaced long-held separation and fear.  Practicing step one and step two set me on the road to peace and happiness. As I repeated this one-two dance, I realized how much my well being was my choice.

At any moment I learned to ask myself: Do I choose the law of self-retribution and face my self-righteous sentencing, or do I choose the grace of acceptance, forgiveness and compassion?  The more I made this loving choice the boundaries of my compassion overflowed to others. I unburdened myself of keeping score and wiped the slate clean. Trash became treasure as I began to see my past mistakes and the mistakes of others through the eyes of gratitude for the gift of self-forgiveness.

The alchemical process of applying the elixir of loving to hurt, and compassion to blame and shame transmuted the baseness of my human nature into gold – purity, strength and courage. I had become a loving being. Past, present and future were then sanctified and I became, at heart, reborn.   Would you like to experience the elixir of loving and freedom from suffering yourself.

There are several programs that are offered depending on whether you would like a self-paced on-your-own program or would rather work in a group with live calls and feedback from Rebecca. If you would like to discover which approach would be best for you CONTACT REBECCA for a complimentary Discovery Session.  She will listen to where you are, where you want to go and together you will decide the best choice for you.