Loving is a Choice

There was no place to run or hide. I had to stand there and take it.

“You have ruined your children’s lives and they will never forgive you. How could you break up the family?”

These harsh words brought stinging tears to my eyes. The blood rushed out of my body and my knees felt weak. I stood frozen at the kitchen sink where I had been doing dishes, paralyzed by the intensity of the condemnation.

In this moment I recognized the blaming and shaming voice was none other than my own! I felt myself leaning on the counter for support. Where had I learned to be so cruel?

It all started with my decision to end my 10-year marriage.

For months I had tried to deny the small but persistent voice in my heart that whispered, “It’s over.” I dreaded the disapproval, judgment and rejection I assumed would come my way from well-meaning but ill-informed family and friends. However, I found that my hardest critic during that difficult time was ME. I told myself I was the one who had broken the unspoken family code that dictated I stay in the marriage no matter what.

My then-husband and I had been doing a convincing job playing house, shielding our kids from the breakdown of our marital relationship. They were four and seven at the time and completely taken by surprise when we told them about the divorce. We decided to keep their routines as regular as possible for the months left until summer break. We each took a turn spending a week at the house. Striving for normalcy, we kept them in the same bedrooms, the same school, and with the friends they knew.

Like many kids, they were devastated by the divorce. The most difficult thing for me was being away from the house when I was used to being a Mom full time.

I believed I deserved to feel miserable.

I heard that terrible voice out loud one day when I said to a friend, “I know it was all my fault. How could I have been so selfish?”

There it was, the “S” word. How often had my mother accused me of being selfish as a young girl when I was trying to assert my own voice, or name my own choices, or decide from my heart? In fact, as an adult, I was still defensive and reactive around my mother. I thought, “Wait a minute. Was I really being selfish when I decided to end my marriage?” Again I heard that soft voice in my heart: “No. I want to experience the truth about love.”

What could that possibly mean? Love was about the other: finding love, seeking love, waiting for love. Wasn’t that the truth? How was I going to find out the truth about love?

The year of the divorce, when summer break came, the kids and I were able to explore my new place together. We got to know the neighborhood. They adjusted and even began to make some new friends there. The effort to keep them on an even keel had been worth it.

Later, I went through an intensive healing program. I still sought love’s true nature. The course focused on self-acceptance and self-forgiveness. The facilitators suggested I was my toughest judge, and the cause of much of the intense unhappiness I was feeling. The moment when I had been washing dishes and recognized that harsh voice as my own came rushing back. I realized that inner voice was still very loud. It described me with terms like selfish, vengeful, awful, self-condemning, miserable, socially outcast, emotionally exiled, and inexcusable. I also felt stuck as my rational mind questioned the ideas of self-acceptance and self-forgiveness at every turn.

I had to get out of my head. I needed to listen to my heart.

I came to realize my heart’s voice might not have the volume of that cruel voice, but it had a quality to it that was unmistakably compassionate and loving. This was the beginning of breaking down the beliefs that had held me hostage for so long. Gradually, I began to learn how to focus on my inner voice of compassion instead of the hurtful voice. I worked through the healing program and began to meditate and journal regularly. I realized like a bird in a tree, a feeling just is.

My heart warmed up to that truth. I began to find it easier to tune into the accepting, forgiving, loving voice of my true self.

I remember a big moment for me when I was talking to my mother on the phone. She was doing her best to support me, yet she was disapproving. She was questioning me about how things were going and how the kids were doing. I recall her voice had a certain tone to it, somewhere between “I’m really concerned about you” and “I’m judging you and don’t approve of what you’re doing and I’m really concerned about you”.

I remember being able to observe, accept, and forgive myself for whatever was coming up in that moment. I did not get defensive. I did not get reactive. I could hear the concern in her voice. I said, “Mom, I know you’re really concerned about the kids and about me and everything and I need you to know I’m okay. I’m really okay.”

After that call, I took a nice deep breath, exhaled, and thought, “Whoa, glad that’s over!” It was great. I felt I had maintained my sense of my own truth. I was not focusing on inner blame or shame just because I had heard disapproval in my mother’s voice. I had come a long way since feeling paralyzed while doing dishes at the kitchen sink. 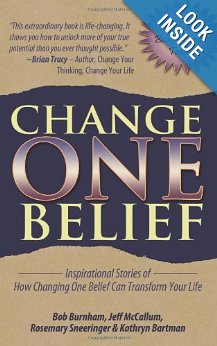 Eventually, I was able to open my heart, accept the feelings and forgive the self-judgments. I realized my inner wellbeing was my choice and my happiness didn’t depend on receiving love from others.

The truth about love? Love comes from inside me. Love is who I am.

“Loving is a Choice” by Rebecca Skeele – Chapter Excerpt from Change One Belief available on Amazon.com