Finding truth and what really resonates with me at this time of my great despair over the events that are transpiring in this country and around the world has taken me on a journey to read and watch mystical prophets of our time talk about evil, Holy Darkness, the Apocalypse, the rise of the Divine Feminine, sacred action and radical loving in the face of the destruction.

And I am finding a kind of validation in the mirror that they are holding up – and in my ability to look at and take in fully the faces of the apocalyptic times we are all walking through.

My sacred calling is co-creating heaven on earth.

It is a vision and purpose that has shaped my life, my choices, the work I do with others and what I hold precious for many years now. But what began happening inside to that vision and heart- passionate calling this year was not a joyful inspiring soaring up-swell of hope but a gradual and palpable descent into the depths of the underworld – the realm of the fierce Mother of death and destruction – which culminated in the election results of November 8th. 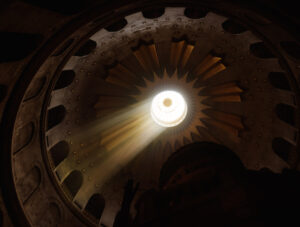 The Rotunda above the Edicule in the Church of the Holy Sepulchre, Israel.

I had two prophetic dreams and one divine question downloaded this Fall. Dream one came in October and the second one a week after the election. The first one was a nightmare. I don’t usually have nightmares. But in the nightmare dream, a darkness was coming after me and when I woke up startled loudly voicing NO – from that day forward an anxiety began building.

The night of November 8th I realized the first signs of the inner destruction – the Darkness – of my vision of ‘heaven on earth’ and the place inside of me that had held great joy, light and love for this planet and all humanity. That’s the night She began dismantling all of my prized platform of spiritual wisdom and high-flying experiences of myself as a divine being.

The destruction was swift and thorough. I was immediately plunged into a very ‘dark night of the soul’ and not able to articulate what was really going on. I wept instead. After about a week of this death-filled existence, I had the second dream. I woke up with two words – Raw and Real. Somehow I knew this was a lifeline that had been thrown down into my pit of despair that I could use to start climbing out. But the words to articulate what I was experiencing still did not come. I was definitely in the ‘rawness’ and I did not try and latch onto any platitudes that would create an illusion that was ‘less’ real. I just sat in it. Stunned, silent and lifeless.

Weeks later I was invited to write a monolog about my election experience and it was then that I received the divine message. Like the two dreams the message came from the Darkness that had engulfed me but by now I Knew Her presence.

She had blown apart my heart into a million pieces without giving any thought to how I would ever feel a whole heart again.

But Her words hit the target and the question She posed, I realized, was my gauntlet for the sacred challenge that was looming before me: “So Rebecca, She spoke gazing into the chasm that used to be my heart, what expression of your radical loving will you bring to the world, NOW?”