Deb’s Story – One Dinner Table at a Time

Deb believes that sacred work is ‘work’ that is bigger than just you. It involves other people, it has a holy element which she names as ‘the greater good’, and it invites the person to be quiet and contemplative so that one ‘right-sizes’ oneself – staying the course and not getting pulled off or distracted by the ego needs and wants.

For the past three years, Deb has been immersed in the sacred ambition and sacred calling process which has led her on an inner journey to discover the blessing she wants to bring to the world. 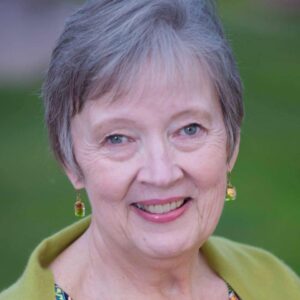 “What does the world need and what unique gifts do I have that I can bring to whatever issue I am feeling called to?” That was Deb’s prayer.

Deb had many years of experience in the HR Departments of corporations. Her work was important she thought but as she began to grow personally and gain more experience she realized that being a voice for the management did not always line up with her truth – and the corporate work began to weigh on her heart.

Now retired and not really having to make money at this stage in her life she is drawn to the sacred ambition approach of discovering the calling that is truly in her heart – and then following it.

“What surprised me was the direction of the conflict resolution approach that surfaced this year. I found myself wanting to do something about the race relations – specifically the conflicts in race between African-American women and white women…and, at the same time, address the unconscious but oh so prevalent issues for white women of white privilege.”

Deb grew up in Erie, Pennsylvania and now lives in the Chicago area so she has seen and experienced first-hand the segregation, anger, prejudice and suffering that the lack of dialogue between blacks and whites has caused.

“We really do not know how to sit down with each other and talk openly.” And this, for Deb, was no longer tolerable.

So she reached out to an African American woman friend, who was also trained as a teacher of conflict resolution, and together they are wanting to form small groups of women – 4 to 6 – to sit around the table and talk openly about what is breaking their hearts in this current political and socio-political environment and to foster compassionate listening so “we can heal the children and heal our communities.”

Another surprise for Deb was the response from her African-American thought leader friends when she would ask them about white privilege. “Deb, we are tired of trying to bring white women along in understanding white privilege. We think that it is a conversation white women need to have with other white women – to raise their awareness and discover how owning their white privilege can help heal the rift in our communities.”

“It seems to me that in our current political climate everyone has given themselves permission to voice their hatred of one ethnic group or another. I find that really disturbing.” So Deb has turned her heart aching response into sacred action.

So where is her sacred action today?

“Right now”, Deb continues, “it’s research and conversation time for me. I need to continue to ask questions and gather the responses so when our groups do start we will have some sense of the territory and where to begin.”

“This is soul work for me and I realize that I need to go deep, have conversations and proceed with a thoughtful research phase rather than leap in with both feet. That’s where I am and it is really rich.”

One of the inner treasures Deb is discovering through this sacred ambition social initiative is she is listening and trusting herself more. She is centered on the truth and integrity of who she is – the Greater Self – and being her own person in the world. Showing up as herself is something she has had to grow into – but today it feels fabulous.

The seeds of this deeper calling to work with women in the area of dialoguing around issues of race began very young for Deb. She grew up in a neighborhood in Erie and was aware of sexual abuse, poverty and strong emotions of anger. Her Father helped instill in her that they were to share who they were and what they had. This environment helped shape her world view and she realizes not much has changed in the neighborhoods around race relations since those younger years in the 50’s and 60’s.

So she choose a career in HR specifically to assist people to learn to live more peacefully and agreeably with each other.

Deb’s story illustrates the way sacred callings emerge over time. The seeds are often found in our early impressionable years and then grow over time to a full blossoming of blessing and heart.

What does Deb feel are the important guidelines that she has learned from her time in the sacred ambition mentorship?

“Definitely Know who you are is so important; Getting rid of a lot of baggage and behaviors that just don’t work anymore; Knowing that you are a Divine being and that you have gifts that you can experience in much greater abundance when you are teamed up with others. And I would add that having an ongoing dialogue with your Higher Power or whatever you call Divine Guidance because that keeps you focused on the greater good so the inner fears do not get in your way.”

Groups of 4 to 6 women sitting around a dinner table or in someone’s living room all over Chicago. She hopes that through securing grant money and other types of support this big dream will create healing conversations all over the city.

“And we keep reminding ourselves that it’s going to be one dinner table at a time.”